“I AM weak. We all are. Only through our positive thinking and actions do we become strong. Even the weakest person in the world can become the strongest in their own mind.” 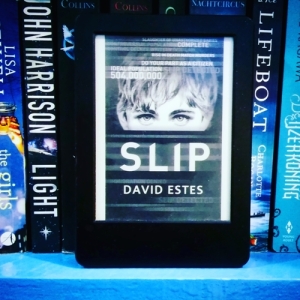 *** A copy of this book was kindly provided to me by Netgalley in exchange for an honest review. Thank you! ***

I’ve had this series on my radar for a long time, so when I saw a copy pop up on Netgalley earlier this year I thought it was the perfect excuse to finally get to it. And although it still took longer than expected to pick up my copy of Slip, it was just the story I was looking for when I did. I admit I have been trying to avoid the whole dystopian genre this year, mostly because in general they seem to have lost their originality and ‘spark’ for me. The blurb of Slip triggered something though and now I’ve read the story I still think the idea behind this story is very interesting. I’m not sure if I can call it original, but this alternative world seems to be well developed and the ‘new’ government and their methods to control without doubt controversial. I did have some difficulties adapting to the somewhat childish tone of the writing style; especially in the first bit of the story when the main character is younger. Things did improve later on, although I felt the tone was slightly off throughout the story. The writing style is quite fast to read though and I liked how this alternate world had its own vocabulary for things. The pace did slow a bit due to the many different storylines and characters making their appearance during the story. I actually found myself to be a bit confused about where everybody fit at points, although that feeling mostly went away in the second half of Slip. Another bonus: there is only limited romance involved! True, there is a slight hint of a love triangle as well, but in this first book those with love triangle allergies (like me) are still safe. All in all it wasn’t a bad read and dystopia fans will probably enjoy this one quite a lot.

After the floods part of the USA is now permanently under water and the Reorganized United States of America has to implement drastic population control measures to control the situation. The threat of not having enough resources and food to sustain the growing population is the main reason there is now a new law: someone must die before another can be born, and birth authorization must be paid before having a child. Experts have discovered the optimal population number, and with this new law this number should stay the same. The government organization Pop Con is responible for making sure everyone sticks to the law… Meaning terminating any children resulting from unauthorized births no matter what age. But what happens if one of them manages to slip through the cracks?

There is no doubt the concept behind Slip is very interesting even though I’m not sure if the story is actually all that original. With so many storylines and characters the plot feels a bit chaotic at points and it can get a bit confusing, but I guess it does add some dept to the story. The tone was a little off for me as well, but in general this was still a solid dystopian read. Plus, not having to deal with a huge dose of sappy romance was an added bonus!