“A rush of adrenaline swept over her. Nothing ever quite compared to the buzz of a new crime scene, an untouched puzzle fresh out of the box.” 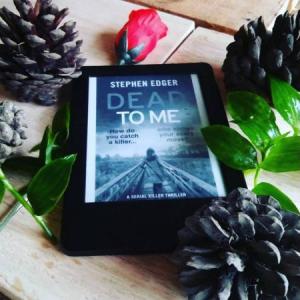 *** A copy of this book was kindly provided to me by Netgalley and Bookouture in exchange for an honest review. Thank you! ***

I think just about everybody already knows by now just how hard I find it to resist a Bookouture thriller… Dead To Me by Stephen Edger was no exception to that rule. This book had me at the cover and the mention of a serial killer and I was initially very excited about this title. But then mixed reviews started popping up, and my excitement turned into worry. What if I didn’t like the story either? I posponed picking it up for longer than I would have liked, but finally did read it last week. And I was pleasantly surprised by what I initially found when I started Dead To Me. There is no doubt that Stephen Edger‘s writing style is very engaging and draws you right in. The plot itself is well developed and intruiging with a lot of plot twists that will keep you guessing for a long time. And that serial killer! Very twisted indeed and there were things I didn’t see coming at all. This all sounds very positive, so why the lowish rating? One word: Kate. Basically, the main character Kate ruined what could have been a great and intense thriller for me. I absolutely despised her! The way she treats her daughter, doesn’t care about her safety and even forgets she’s there at times… Not caring about police protocol, doing whatever she wants without considering the consequences, endangering others, undermining active murder investigations… And I can go on with that list if I want to. Ugh! It’s a shame one character can influence my opinion about a story that much…  But I personally found it really hard to keep tolerating Kate AND enjoying Dead To Me at the same time, especially since she plays such a big role in the story and the developments in the plot. As I said before, the writing is GOOD, the plot intense and twisty and this first book of a new detective series has a lot of potential. Unfortunately my dislike for the main character will stop me from continuing this series… I have seen others not being all that bothered by Kate though, so give this book a chance if the things about Kate I mentioned above don’t curl your toes.

Detective Kate Matthews is called in to investigate the brutal murder of a woman, who was found in an abandoned bar near the Southampton docks. Kate still hasn’t recovered from her role in the death of a close colleague, and is told she must solve the case to prove she is still up for a leading role. Her team keeps hitting dead ends, until Kate discovers something that will blow not one but various cases wide open… But nobody seems to believe her findings or theory, and that leaves her with a very difficult decision.

There is a lot to love in Dead To Me and I would probably have given it a lot higher rating if it wouldn’t have been for the main character Kate. Sadly I couldn’t ignore the fact that she is the most important character of this new series and the whole story is told around her… And it’s really hard to properly enjoy a story when you absolutely despise the main character, no matter how good the writing and plot are. The writing, plot, twists and intense feel were more than promising and I do hope there will be a ‘Kate-less’ thriller by his hand in the future.

16 thoughts on “ARC REVIEW: Dead To Me – by Stephen Edger @bookouture”