Call me a nerd, but I do love my graphics posts! I first started properly keeping track of my reads in Excel back in 2016, making it possible to finally put together some graphics. I’ve done a bunch of ‘The Numbers’ posts over time, including my 2016 post, and it has been revealing interesting things about my reading habits. So why stop? 😉

I already published two similar posts last year with my January-April and May-August numbers, and this post will be all about the whole year of 2017. Let’s talk nerdy and see what my numbers were like for 2017, shall we?

First of all some quick facts. In the whole year of 2017 I have read no less than 189 books with a total page count of 63.439 pages; an average of about 336 pages per book. This is 5 books less than in 2016, but thanks to some longer reads I did manage to read more pages! My pagecount was actually 1.271 pages higher in 2017, so all in all another very good year despite the slump. The average rating is 3,63 stars, which is actualy 0,1 point higher than the total last year and something I’m happy about since I did have two 0 star ratings (DNF). No less than 57 books had a 4,5 or 5 star rating and 33 books received a rating 3 stars or below… Which means I enjoyed reading about 83% of the books during the year. These numbers definitely make me smile! Another fun fact: 125 of the 189 books I’ve read so far were actually ARCs; about 66% of the total. Way more than I was aiming for, but this did help me almost empty out my Netgalley shelves so I can make 2018 all about my own books.

And now some graphics for those who like them as much as I do. 😉 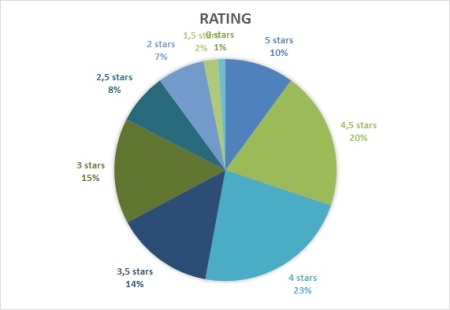 This graphic above explains exactly why my average rating ended up being quite high… About 53% of the books I read last year had a 4 star rating or above! And only 18% received a 2,5 star rating or below, so all in all I’m very happy with this one. 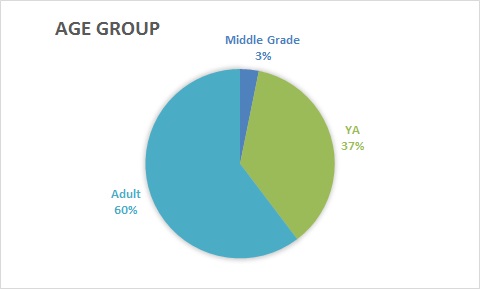 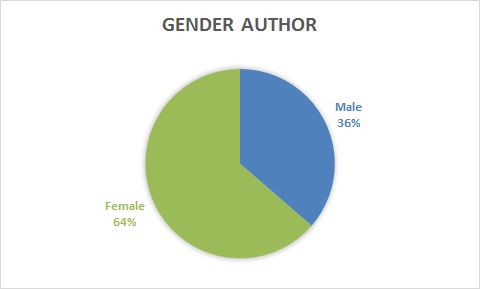 One of the things I’ve been trying to do in 2017 is read more books by male authors, because somehow I always seem to be reading more books my female authors (even though I never base my choice of books on the gender of the author). I’m pleased that compared to 2016 the percentage went up 8%! 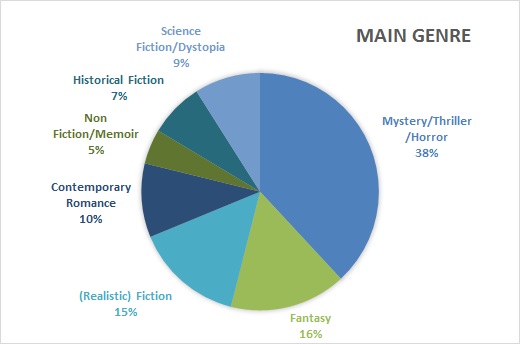 The main genre is basically the most dominant genre I think each book belongs to. As always mystery/thriller/horror is the biggest group (there’s truly no surprise there for those who follow my blog!), and fantasy is well represented as well. The number of contemporary romance reads is actually quite big, which is actually a surprise since it’s not one of my favorites. The small amount of historical fiction reads is surprising as well, since it’s one of my favorite genres. 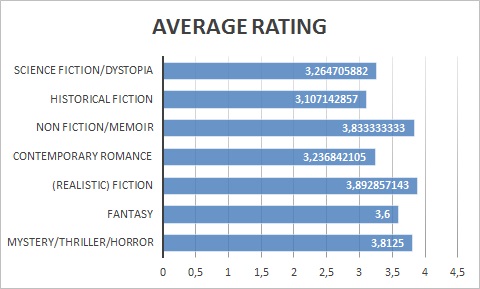 This average rating graphic is quite a shock… Although I’m aware each genre has received a few lower ratings during the year. The genres (realistic) fiction (3,89 rating), non fiction/memoir (3,83 rating) and mystery/thriller/horror (3,81 rating) belong to the top three genres with the highest ratings. Historical fiction (3,11 rating) was actually the lowest, which is a shock since it’s one of my favorite genres! I’m not really surprised by contemporary romance (3,24 rating), but sci-fi/dystopia (3,26 rating) was also quite low. The last genre is actually quite funny, since it was the top scoring genre in 2016. 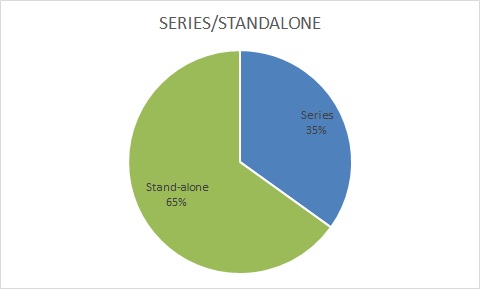 The series/stand-alone ratio has been almost the same as in 2016, and I’m actually quite happy with this. As much as I love reading series, I tend to neglect them with the result of a huge pile of unfinished series collecting dust. And there is no such problem with stand-alones! 😉 I do want to finish a bunch of those unfinished series in 2018 though. 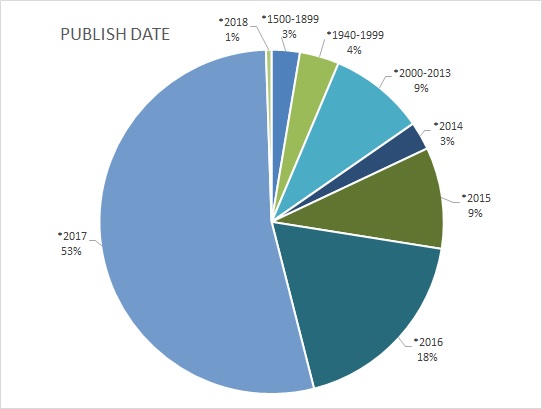 Boy do I feel bad about this graphic! I joined the Beat The Backlist challenge and have other challenges as well to help me read older titles, and somehow only a meager 19% of the books I’ve read in 2017 are published in 2014 or before. Oops? To make things worse, 53% of the books have been published this year… I guess it does show I have been reading mostly ARCs. xD I did manage to read a few classics and older books in the last months of 2017, so there is at least some improvement compared to the previous 2017 posts. 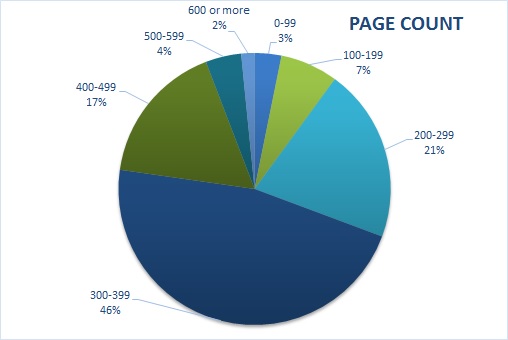 Last graphic: as always most books I’ve read have between 300 and 399 pages, which seems to be a pretty good number and a  sign of a story that’s not too short and not too long. There are exceptions of course; some stories are just too complex to be told in under 400 pages… What I am happy about is that I’ve read quite a few longer books as well (more than in 2016, which is why I ended up having a higher page count despite the lower total of books read); a total of 23% of my books had over 400 pages.

Tired of numbers yet? I know I am! That’s it for this 2017 review… Happy reading everyone!