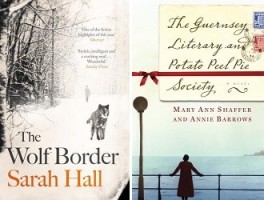 I’m still reading The Wolf Border by Sarah Hall, but that’s mostly because I haven’t been in the mood for it and put it aside to read other titles first. I’m finally continuing with it though and hope to finish it soon. I’m also starting The Guernsey Literary And Potato Peel Pie Society by Mary Ann Shaffer and Annie Barrows, a title I’ve been looking forward to.

1. Final Betrayal by Patricia Gibney (3/5 stars) REVIEW
I was really hoping to fall in love with this series again, but once again the story failed to hit the mark completely for me… It’s not a bad read, the writing still reads lightning-fast and there are a lot of twists and turns involved, but for me sadly the spark of the first four books was missing. I felt there was almost too much going on in Final Betrayal, with multiple characters and POV switches even within the same character. Instead of adding the characteristic dept and complexity to the plot, I rather found it confusing and almost irritating this time around, especially since you never seem to get to settle down with one character for a little while. I had my doubts about the credibility and wasn’t convinced by the final reveals either… It has convinced me Lottie Parker and me are overdue for a little break and I have decided to step away from the series and leave it for those who still feel the same love for Lottie Parker.

2. How To Walk Away by Katherine Center (4/5 stars) REVIEW 18/04
I think I’ve become an instant fan of Katherine Center‘s writing, and she is a new addition to my short list of contemporary romance writers that make me enjoy the genre. It took a few chapters to warm me up completely to the characters and the situation, but once I did I was hooked. Following the main character as she has to learn to live with the consequences of the accident was both heartbreaking and intriguing, as her struggles and fears are realistically and well described. I could really appreciate this was more of a slowburner romance and instead there is a lot more focus on Margaret’s situation and personal development. The chapters set in Belgium brought back memories of Bruges and made me crave chocolate! The ending of How To Walk Away was without doubt satisfying as well and I would recommend this story to anyone who enjoys the genre.

3. Across The Universe by Beth Revis (3,5/5 stars) REVIEW 21/04
Despite the romantic cover, this first book of a YA science fiction series set in space is surprisingly light on the romance. There are hints of it now and then, but the main focus is the fact that the story is set on a space ship and the mysterious attacks that take place. And as you might guess, that is a huge bonus for me! The writing is engaging and this story is really easy to read. I liked the setting on the ship and how the story is able to show us the effect of having to live on a ship for generations has on its inhabitants.

4. Little Darlings by Melanie Golding (4/5 stars) REVIEW 19/04
If you enjoy reading psychological thrillers and are looking for a little something different, this could be the perfect read for you. Folklore and fairy tale elements are mixed with suspense and a mental health angle in such a fluid way that really makes the folklore stories come to life… A very interesting mix of genres that will keep you wondering until the very end.

I’m hoping to pick up Before She Knew Him by Peter Swanson next so I can finish it in time for Janel’s Instagram @criminallygoodbookclub… I also need to start making a dent in my May NG ARCs if I ever want to catch up, so The Book Woman Of Troublesome Creek by Kim Michele Richardson is up soon. I need to read the last few titles for the #OWLsReadathon2019 challenge as well, and The Murder On The Links by Agatha Christie is up first. That one will also be the first title for the Reading Through The Centuries challenge! My TBR jar pick is still Sweetheart by Chelsea Cain; I don’t think I’ll be able to get to it this month since I have a bunch of other titles I need to get to first.