Call me a nerd, but I do love my graphics posts! I first started properly keeping track of my reads in Excel back in 2016, making it possible to finally put together some graphics. I’ve done a bunch of ‘The Numbers’ posts over time, including my 2016, 2017 and 2018 posts, and it has been revealing interesting things about my reading habits. So why stop? 😉 This post will be all about the first four months of 2019. Let’s talk nerdy and see what my numbers were like, shall we?

First of all some quick facts. In the first four months of 2019 I have read no less than 90 books with a total page count of 29.950 pages; an average of about 333 pages per book. This is way more than I expected and if I keep it up I will actually break my 2018 record… Although I don’t think that will actually happen. The average rating is 3,55 stars, which the same as in 2018 so I guess not too bad. No less than 19 books had a 4,5 or 5 star rating and 30 books received a rating 3 stars or below… Which means I enjoyed reading about 67% of the books during the year. Not that bad at all, even though the number is lower than I would have hoped. Another fun fact: 37 of the 90 books I’ve read so far were actually ARCs; about 41% of the total. This is really close to my goal to keep that ratio below 40%, so I’m quite happy with that!

And now some graphics for those who like them as much as I do. 😉 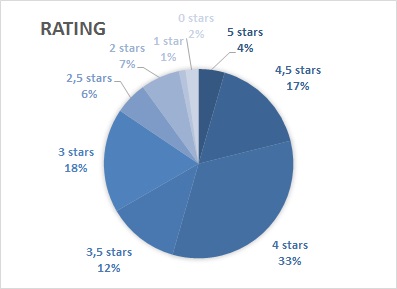 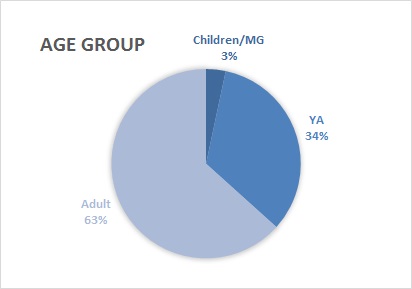 I already knew I haven’t been reading a lot of Middle Grade, but I really should try to get a few more titles in… And it shows I still read more Adult than YA, although the amount of YA titles did go up a little compared to 2018. 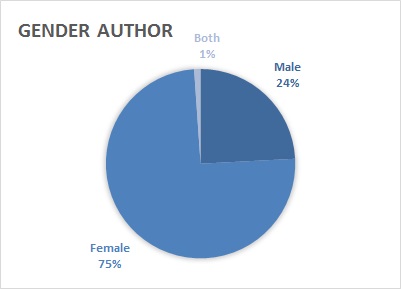 One of the things I’ve been trying to do is read more books by male authors, because somehow I always seem to be reading more books my female authors (even though I never base my choice of books on the gender of the author). Sadly, things are even worse than in 2018… I really need to step up my game here. 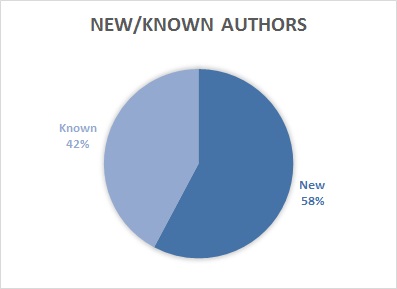 I’m surprised to see I’ve been discovering way more new authors than reading books by authors I’ve read before in the first four months of 2019… Not a bad thing necessarily, as I love discovering new authors, but I want to go back to old favorites in the upcoming months as well. 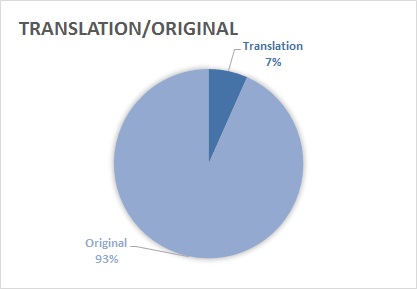 These numbers are not a surprise as I normally prefer reading the original story, but with a lot of languages I don’t exactly have a choice. 😉 It’s interesting to see what a whopping 7% or 6 books were actually translations so far this year! 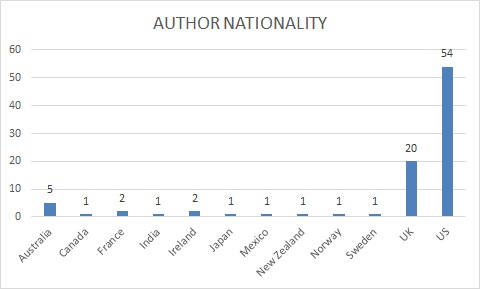 I thought it was interesting to keep track of the author nationalities… The mayority of my reads were between UK and US authors (no surprise here), but I’m happy to see quite a few other countries on here as well. 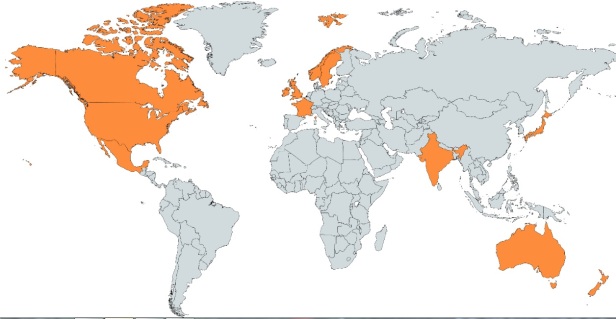 This is what the previous graphic looks like on a map! The countries in orange represent the nationalities of the authors I was able to read so far in 2019.

And here is another map, this time around of the different settings I managed to travel to with the help of the books I read during the first four months of 2019. In case you are wondering how I’m able to create the maps; I’m using this page. 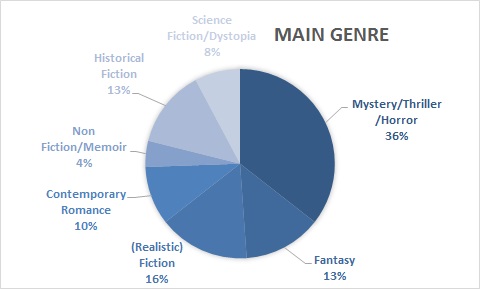 The main genre is basically the most dominant genre I think each book belongs to. As always mystery/thriller/horror is the biggest group (there’s truly no surprise there for those who follow my blog!). I like how most other dominant genres are well spread out though; it looks like I read a truly eclectic mix of books during the first four months of 2019. 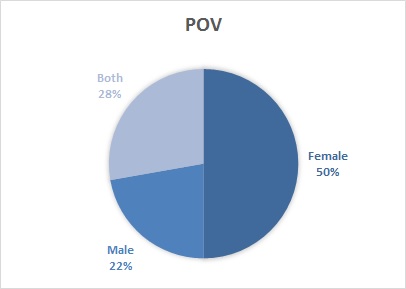 A new graphic! I decided to start keeping track of the POV in each story… And a surprising amount of stories ended up having more than one POV where both genders are represented. 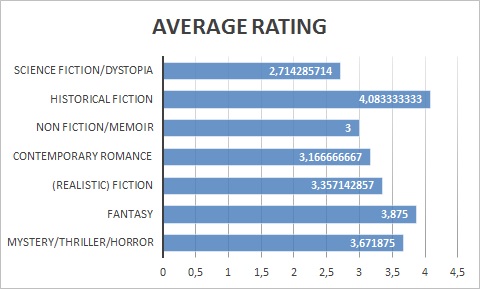 This average rating graphic is quite a shock… Although I’m aware a lot of genres have received lower ratings. It seems I have been super lucky with my historical fiction reads which received a whopping 4,08 rating. Next up is fantasy with another excellent 3,86 rating… Mystery/thriller/crime still did good with a 3,67 rating. Science fiction/dystopia and non fiction/memoir were really low with a 2,71 rating and 3 rating respectively. I’m actually quite shocked by the lowish ratings of the genres in general, but I guess it’s due to two DNF (0 rating) and other low reads I sadly had in in the first four months of 2019. 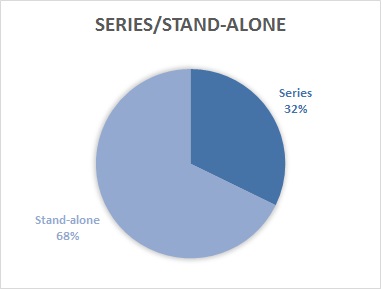 It turns out I’ve been reading even more stand-alones than last year! I’m not that surprised though… As much as I love reading series, I tend to neglect them with the result of a huge pile of unfinished series collecting dust. And there is no such problem with stand-alones! 😉 I do want to finish a bunch of those unfinished series in the rest of 2019 though. 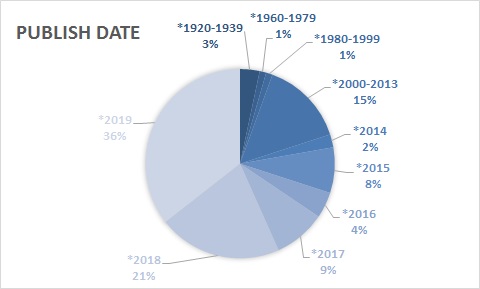 Finally an improvement! I joined the Beat The Backlist challenge again to help me read older titles, and it seems to work… 34% of the books I picked up were published in 2016 or before, and a total of 64% of the books were published before 2019! I seem to be able to finally balance out those ARCs and backlist titles better. 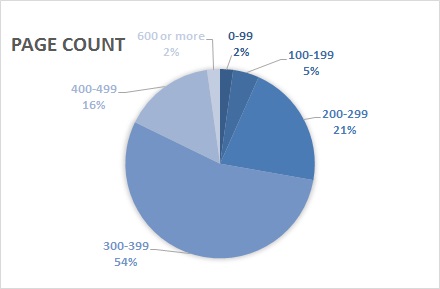 Last graphic: as always most books I’ve read have between 300 and 399 pages, which seems to be a pretty good number and a  sign of a story that’s not too short and not too long. There are exceptions of course; some stories are just too complex to be told in under 400 pages… I’m happy to have read more longer books compared to 2018! A total of 18% of my books had over 400 pages.

Tired of numbers yet? I know I am! That’s it for this post… Happy reading everyone!