Time for another round of Yvo’s Shorties! This time two different genres, a backlist title and a new release… The first is Two Boys Kissing by David Levithan, which I picked up both for Pride month and for the banned books prompt. Sadly, I wasn’t able to connect to the writing style at all though. New release My Lovely Wife by Samantha Downing turned out to be a delightfully shocking read though.

“He has no idea how beautiful the ordinary becomes once it disappears.”

I was browsing banned books for a challenge, came across Two Boys Kissing and thought it would be a perfect choice for Pride month as well. I was curious to see why this story ended up on the banned books list, although I already feared (correctly) that it would have to do with the LGBT element. Sadly, I ended up having mixed thoughts about Two Boys Kissing… It had nothing to do with the actual content, and I’m sad this story was put on the banned books list, but there was something else I really struggled with. What? While I loved the idea behind this story and the symbolism in general, I wasn’t a fan of the writing style at all. The whole second/third person POV was both alienating and extremely annoying and made me enjoy the story a lot less than I thought I would. It might be an original way of telling the story (I don’t deny that), but sadly I really didn’t get along with the writing style at all. I’m positive I would have rated this story a lot higher if we would have read about the main characters from their POV; dual or multiple would have been the same. Instead, we have the strange voice of ‘past unidentified LGBT persons’ and a whole bunch of random characters the story keeps switching between… It takes a long time to keep them apart, seeing how everyone fits and realize which is actually the main story; the fact that there were so many character/POV switches made it really hard to keep track of the story and stay invested. I can’t deny Two Boys Kissing has a strong LGBT message though, and I loved the idea of the record breaking and the background of each character. Two Boys Kissing wasn’t for me due to the writing style, but I can see why so many love it.

“Now I see my mistake. Focusing only on my family has left me isolated and alone, except for one old friend who can never know the truth.” 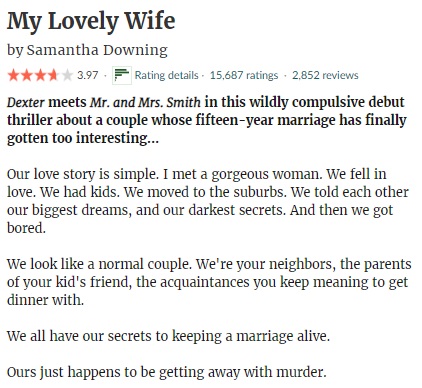 My Lovely Wife has been everywhere these past couple of months and I finally found time to see what all the buzz is about. I admit I went in blind, thinking I was going to find a nice and docil domestic thriller despite the knife on the cover… I couldn’t have been more wrong. What a delightfully twisted and properly disturbing read! If you are, like me, strangely into serial killer stories, imagine finding not one, but TWO in one story… And a couple at that! As soon as I was hit with that mindblowing information, I was hooked. And not just ‘normal’ hooked; I literally read the whole thing in one sitting by candle light (not by choice though as we had a country wide power failure that day), not caring if I was basically ruining my eyes or if had other things to do. I just HAD to know how things would develop and how twisted things were going to get. Trust me, you will never guess just how crazy and disturbing My Lovely Wife is prepared to go for our reading entertainment. I’ve seen people questioning the credibility of it all, and they do have a point, but I was too busy devouring every single world of this twisted masterpiece to really care. A double dose of secret identities, two serial killers, a conspiracy plot, lots of twists and one heck of a shocking surprise as the story takes a turn you won’t see coming… If you haven’t read My Lovely Wife yet, make sure to clear your schedule before you start, because trust me, you will find yourself unable to stop reading.