“We always think we want to know secrets, but what we forget it that they come with their own weights, heavy as millstones, and if you aren’t careful this weight can crush you.”

*** A copy of this book was kindly provided to me by Netgalley and Thomas & Mercer in exchange for an honest review. Thank you! *** 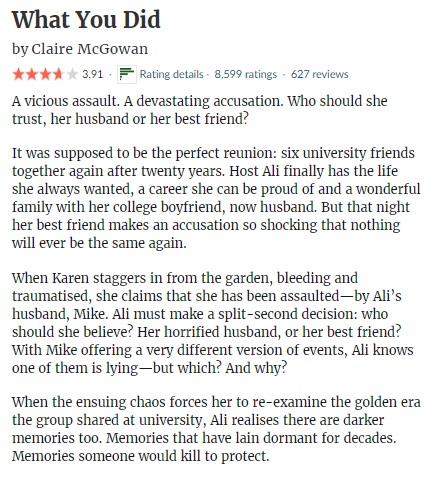 After being bombarded by positive reviews during the respective blog tour, I just couldn’t help giving in and request a copy when I saw it on Netgalley… There is no doubt that the premise of What You Did sounds absolutely intriguing and I couldn’t resist picking up this story almost immediately. And while I ended up having mixed thoughts myself, I can also see why others have a more positive reaction to this story.

It’s all in the characters. What You Did fits the definition of a slower paced and character driven psychological thriller perfectly, and this means that your reaction to the different main characters as a reader is fundamental and directly linked to your experience with a book. Sadly, it wasn’t ment to be between the main characters of What You Did and me. Out of all the main characters, I think the only one I actually liked was Bill, and I still wanted to hit him for certain actions and basically for having no backbone. The other characters… Sigh. Where do I even begin? I don’t want to give away too much to avoid spoilers, but let’s just say it involves things like a love triangle, lying to someone for twenty five years, abusing the trust of someone close to you, forgiving someone even though they don’t deserve it at all… I could go on and on, but I don’t want to spoil the fun. Ali was so so frustratingly ignorant and stupid and I basically wanted to shout at her to get a grip and open her eyes already. I don’t think her actions and reactions were natural at all and she managed to frustrate me A LOT. Likewise, Karen, Mike and Callum were basically disgusting and I really didn’t care about what was happening to their characters as they were unable to raise sympathy at all. I know some of them were ment to be unlikeable, but still… My feelings of frustration prevented me from enjoying this story as much as I thought I would.

As for the plot… At first I liked the idea of six university friends meeting again after twenty five years during a reunion. These situations always make for an interesting backdrop and gives the story a lot of posibilities; both by introducing possible flashbacks and character development and growth in general. What You Did gives us both, but not to the degree I would have liked to see… The flashbacks to the events of their final ball of the final university year, 1993, felt rather rushed and I would have liked more background and development here. I guess the main focus of this story is on the present and what happens during their reunion… I wasn’t sure up to what point certain aspects of the plot were completely credible though, and I did see some twists coming quite early on, but as a whole I guess the plot was entertaining enough if you enjoy slower paced stories with a few bursts of suspense.

The writing itself is engaging enough and made it quite easy to keep turning the pages despite my reaction to the characters. These were my personal feelings about said characters though, and if you can stomach unlikeable characters and enjoy a good character driven psychological thriller that packs a punch, you might consider adding What You Did to your wishlist.

5 thoughts on “ARC REVIEW: What You Did – by Claire McGowan”