“There’s a time in a person’s life, if they are truly, truly wicked, when they move beyond the point of redemption.”

*** A copy of this book was kindly provided to me by Netgalley and Avon in exchange for an honest review. Thank you! *** 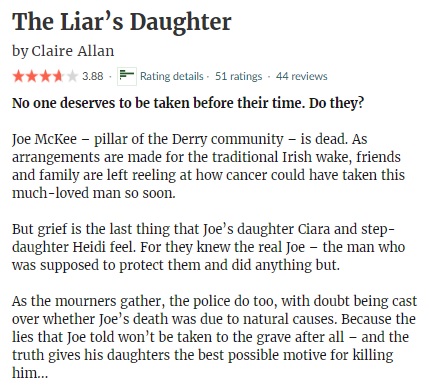 I loved my first experience with Claire Allan‘s psychological thrillers last year and I’ve been looking forward to read more of her work ever since… I was going to read her thriller debut Her Name Was Rose next, but of course I couldn’t say no to reading her newest story The Liar’s Daughter first when the opportunity arose. I admit I was sold as soon as I read the blurb and guessed there would probably be something dark and ominous about this psychological thriller.

The Liar’s Daughter is by no means an easy read and incorporates difficult topics including child abuse, manipulation, cancer and mental health. Especially the first is trigger warning worthy, as it plays a big role in the story and can be hard to stomach in points… That said, I think that Claire Allan did an excellent job both describing and shining a light on the effects and consequences on the victims even years later. Shame, fear and manipulation often force victims to stay silent about their suffering and this story shows just how much it can destroy a life as well as affect those close to the persons involved. I do have to say that I wasn’t a fan of any of the characters though and that includes Ciara and Heidi, who should be easy to feel sympathy for. Joe McKee is of course the true villian despite him being on his deathbed, and he definitely will not win your sympathy (quite the contrary!). Ciara’s partner Stella is probably the most easy to like, although she doesn’t really play a big role in the story as a whole.

Unlikeable characters aside, there is no doubt that The Liar’s Daughter is a super engaging, quick and intriguing read. I literally started and finished it in less than a day! The prose is easy to read and you will find yourself flying through the pages as you want to discover if your guesses turn out to be right. I have to admit that I found the plot to be quite predictable and I guessed a lot of the plot twists really early on. It might just be that I’ve read too many thrillers in recent years, but it did put a minor damper on things… As a whole it was still a very entertaining read though.

The Liar’s Daughter is one of those psychological thrillers you will find yourself reading in record speed despite a somewhat predictable plot. Some parts are quite uncomfortable, especially those related to child abuse and Joe’s character in general, but the situation is well described and used to help shine a light on the problem instead of just looking for a way to ‘spice up’ the plot. If you are looking for a quick and engaging psychological thriller and don’t mind some troubling moments and heavy elements, The Liar’s Daughter is an excellent choice.

13 thoughts on “ARC REVIEW: The Liar’s Daughter – by Claire Allan”