Skip to content
Date: November 10, 2020Author: Yvonne (It's All About Books) 2 Comments

Hello and welcome to my stop of the The Coral Bride Random Things Tours blog tour! A huge thanks to Anne Cater for inviting me to be part of this blog tour. Today, I will be sharing an extract of the second Detective Morales book set in Canada. Originally written in French and expertly translated by David Warriner, in The Coral Bride Roxanne Bouchard returns to main character DS Joaquin Moralès as he once again struggles to conduct a proper investigation without interference. Curious already? Let’s look at the summary before we continue to the extract itself…

What an introduction! It sounds like our main character will have his hands full once again… The sea theme seems to be a trademark of this series, and will again play an all important role in the plot. Are you ready for more? Below an extract to entice you further…

Leeroy Roberts insisted his sons keep scanning the sea, again and again, with the radar and searchlights. They were aboard the Ange-Irène, his eldest’s shrimp trawler. Bruce and Jimmy, and Guy Babin were out on deck with spotting scopes, but Leeroy stayed inside the wheelhouse to watch the radar and automatic pilot. Even with the naked eye, he could see a long way when the moon was that full.

Leeroy ducked into the galley and emerged with a thermos of coffee, packet of cupcakes and four mugs. He set these down on the ledge inside the front window, then he opened the door and called the men over. They filed inside from the cold night air to rub their hands, pour themselves a coffee and wolf down a sugary snack or two. Bruce peered at the computer screen to check the chart and the heading they were on.

His younger brother was still grumbling. ‘We’re way off course! I told you, we’re not going to find anything here. We should be looking further north.’

Jimmy had been going on like that for an hour or more. Bruce kept his mouth shut. This was his boat and he knew best how to navigate these waters. He had weighed all the possibilities and persuaded his father to head south, the way the tide was going, then follow the Labrador Current. Leeroy trusted his eldest son’s wisdom.

But the youngest wouldn’t give up. ‘Stop messing around with your fancy calculations, will you?’

Leeroy knew what Jimmy was like. Since he sold his fishing licence, he’d been strutting around like a peacock with the Babin brothers, but folks knew it was all bluff and bluster. Nobody dared to bring it up back on the wharf, but Leeroy wasn’t deaf. He knew people were gossiping behind his back.

He just kept his mouth shut to avoid any aggro. When he and Bruce went out looking for Angel, Jimmy and Guy Babin invited themselves aboard. It would have been hard to refuse the help, but they weren’t exactly lightening the atmosphere.

‘It’s been drifting more than twenty-four hours, that trawler of hers, so who knows where it’s got to?’

Babin nearly choked on his coffee. Leeroy and Bruce whirled to face Jimmy.

‘What did you just say?’

‘How exactly do you know Angel’s boat’s “been drifting more than twenty-four hours”?’ Bruce pressed. ‘Cyr said he was at the wharf at ten in the morning yesterday and the boat wasn’t there. By my calculation, we don’t know it’s been gone any more than fifteen hours, do we?’

Seeing he wasn’t going to get an answer out of his brother, Bruce turned to Guy Babin instead. ‘Where were you boys last night, then?’

Babin clenched his fists. ‘Why, are you accusing me of something?’

Bruce nodded. He knew what had been going on. Jimmy and Babin knew that he knew. ‘Listen, we’re not going to go stabbing each other in the back, all right? Not over something like this.’

Bruce turned to his father. Did he know the guys were using Angel’s boat? Probably.

Leeroy looked his son in the eye. ‘Whatever happens, none of us point a finger at the other, you hear me?’

Bruce took a bite of his cupcake to avoid having to say anything. His brother was looking at their father with an air of suspicion. He wouldn’t be surprised if their old man was hiding something. It wouldn’t be the first time.

‘That applies to you too, Guy. And that brother of yours.’

He nodded. Guy and Jean-Paul Babin weren’t from the most reputable of families in Haldimand, but Leeroy had hired them young, and that had made them loyal. Today they were far from rich, but they had learned to work hard. And that was something they owed more to Leeroy than their own father.

‘For what it’s worth, Mr Roberts, I reckon Clément Cyr must have a hand in it. Him or his uncle.’

Leeroy was sure he’d done right hiring the Babins, but Bruce had never liked them. Finishing his mouthful, he raised an eyebrow.

‘Say that all you like to the cops, Ti-Guy, but Clément Cyr was at the auberge all night. He’s got an alibi set in stone. That’s more than you lot can say.’

‘Nobody’s dragging the Roberts name through the mud, is that clear?’

The men finished their coffee break in silence.

‘Now get back out there and keep looking.’

Jimmy couldn’t help himself from muttering under his breath. ‘We’re not going to find anything, I tell you. I wouldn’t put it past Angel to do a runner and sink her bloody boat just to get our backs up.’

His words fell on deaf ears, but the others were tempted to think her younger brother might be right.

The night passed under a moon that hung high in the sky even as dawn drew near. As the men rubbed the fatigue from their eyes, the light of day gradually filtered into their darkness-filled pupils.

Suddenly – wait, what was that? Over there. It looked like there was a reflection on the water. Something shiny. Something promising. Bruce was the one who pointed it out.

Leeroy came out on deck and took the scope from his son. ‘Huh! How did you know to look over there, eh?’ Jimmy’s words were full of undertones and spite. Leeroy looked at his eldest son to gauge his reaction. Bruce didn’t say a word as he marched into the wheelhouse and turned the wheel to starboard to steer the Ange-Irène onto the right heading. Leeroy lifted the scope to his eye and scoured the horizon. At first he couldn’t see anything, but then the scope caught a faint glimmer of light. Leeroy’s heart began to race. Because he had a feeling. That reflection was his daughter’s boat. He was sure of it. 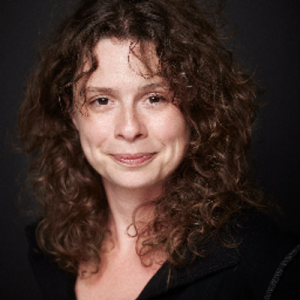 Over ten years ago, Roxanne Bouchard decided it was time she found her
sea legs. So she learned to sail, first on the St Lawrence River, before
taking to the open waters off the Gaspé Peninsula. The local fishermen
soon invited her aboard to reel in their lobster nets, and Roxanne saw for
herself that the sunrise over Bonaventure never lies. Her fifth novel (first
translated into English) We Were the Salt of the Sea was published in 2018
to resounding critical acclaim, sure to be followed by its sequel, The Coral
Bride. She lives in Quebec.