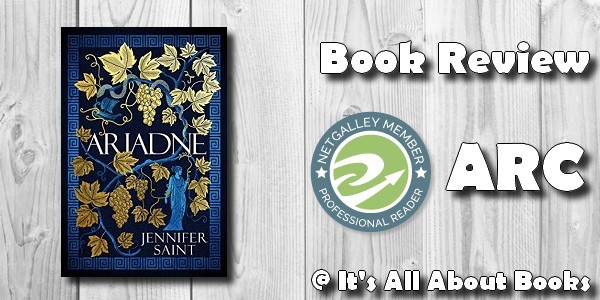 “No longer was my world one of brave heroes. I was learning all too swiftly the women’s pain that throbbed unspoken through the tales of their feats.”

*** A copy of this book was kindly provided to me by Netgalley and Wildfire in exchange for an honest review. Thank you! *** 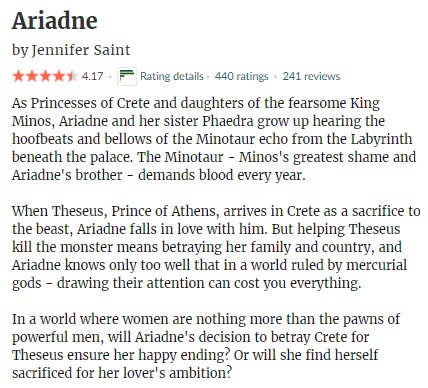 I admit that it was cover love at first sight when I first saw Ariadne… I mean, that absolutely stunning piece of art is basically irresistible! But it wasn’t the cover alone that made me want to read this story. I always love a mythology element in my stories, and the blurb sounded like the perfect fit for me. I already knew part of Ariadne’s story of course (blame the ancient Greek I had to take in high school), so I was excited to see how her story and that of the Minotaur, Theseus and other important mythology characters would be incorporated into the plot. I fully expected to love my time with Ariadne, so I was completely taken by surprise that I ended up struggling considerably with this story instead.

First of all I have to stress that the problem is most likely me, as most people do seem to love their time with this debut. The writing itself is more than solid, but there was just something about the tone that didn’t work for me personally… It’s hard to explain exactly, but I felt like there was a lack of proper personality when the different stories were told, and sometimes it felt more like Ariadne and Phaedra reciting other stories rather than developing their own characters and stories. I struggled to connect to the writing and plot as a consequence, and I would have liked to see their actual characters developed more. Don’t get me wrong, in a way I do like that the author was able to incorporate so many different mythology elements and stories, but I felt it distracted a bit from Ariadne and Phaedra’s story.

Ariadne switches POV between the two sisters Ariadne and Phaedra, and through their eyes we learn more about both their time with the Minotaur and what happens to them afterwards. We also learn more about other important characters in Greek mythology including Theseus, Dionysus and Perseus (and many more). The retelling has quite a feminist feel with the focus on the bad behavior of most men involved and the fact that women usually have to pay for that bad behavior. While undoubtedly true, this message did tire a bit after a while, and I have to say that the ending was quite a disappointment for me as well.

As a whole, I’m still not sure how I ended up having mixed thoughts about this story, because I usually love Greek mythology retellings… (I loved Circe and Song Of Sacrifice for example.) But the fact it that as it is, Ariadne simply wasn’t a right fit for me right now. Don’t give up on my account though if you think this story is your cup of tea; especially since most people do seem to love their time with this debut.