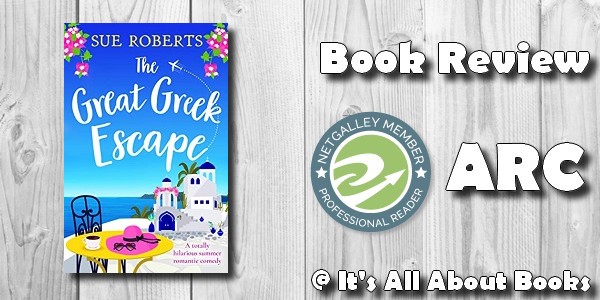 “It makes me realise that we can never really know the demons some people wrestle with inside their mind.”

*** A copy of this book was kindly provided to me by Netgalley and Bookouture in exchange for an honest review. Thank you! *** 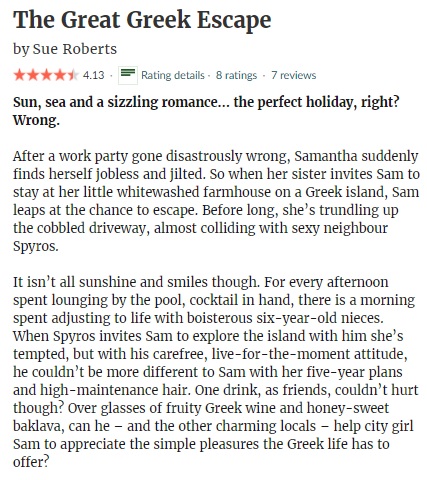 I’ve been craving more uplifting romance reads and I always love a story that takes me to a foreign destination, so I thought I was going to hit the jackpot with The Great Greek Escape. I mean, a Greek setting and the promise of a summer romance with a local? That sounded exactly like what I was looking for to take a little break from my darker reads. I’ve been looking forward to dive in, and to my surprise I ended up having mixed thoughts instead… And the fun, laugh-out-loud and sizzling romance read that was promised might have been just a tad false advertisement. I’ll try to explain my thoughts below.

First of all I have to say that I did love the Greek setting. The author really made both the setting on Rhodes and its inhabitants come alive through the detailed descriptions, and I loved the incorporation of local food as well as Greek phrases. Not only did it make me crave Greek food, but it also set the perfect backdrop for this story and it makes me keep my fingers crossed that I can return to the Greek islands one day. The locals were among my favorite characters (especially Spyros and Sofia), and they were without doubt part of the reason I kept reading.

Talking about the characters… I also really liked Fiona and her family, and I had a great time reading about them. BUT. I really didn’t like Sam’s character at all. She felt considerably flat and cliche and quite self absorbed, and I simply never really warmed up to her… Likewise, her whole interaction with Aaron felt one dimensional too, and lacked the background and development that would have made it feel credible. I also feel that the story didn’t deliver what was promised here: where is the connection and romantic development with the local as the blurb seems to promise, and where is the sizzling romance in general?! Trust me, I’m not complaining that there aren’t any steamy scenes involved, but I wanted a summer romance and the story was very light on the romance indeed.

Then we arrive at another point I struggled with: the introduction of a love triangle and a cheating element that is repeated in multiple characters. Both pet peeves of mine and highly annoying to encounter in what I thought would be a fun summer romance story. And especially the love triangle was a real let down, as the main focus wasn’t even on the local romantic interest and instead kept repeating the rather one dimensional connection between Aaron and Sam without proper background or development. Where is my sizzling romance with a Greek character?! It feels like the final part of the story wants to make up for all that, and as a consequence the ending felt both rushed and unsatisfying.

I wasn’t sure what to make of the TV celebrity and reality TV angle either. I liked the idea behind the premise of Sam hiding away with her family after a scandal, and it does make for a good excuse why she suddenly spends the whole summer on Rhodes. BUT. Her pushing the reality TV program on her sister and her family while they don’t really seem to feel like doing it, and not even considering what other people think in general while pushing her own ideas? This was yet another reason why I wasn’t impressed by Sam’s character at all.

In short, I felt like The Great Greek Escape had so much potential and I did love the Greek setting and various characters, but as a whole this wasn’t the sizzling romance that was promised and not at all as fun as I hoped it would be.