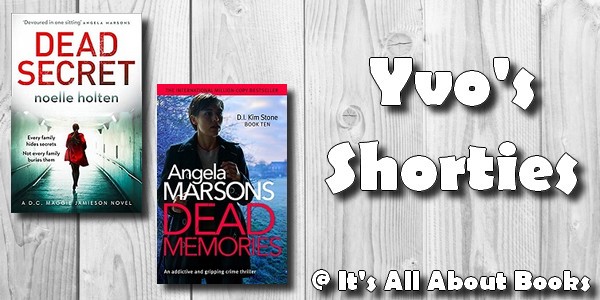 Time for another round of Yvo’s Shorties! This time around two detective thriller sequels that both delivered and then some.

“A new case would be just the thing to focus on so that she didn’t have to deal with her own feelings – everything else would have to take a backseat for the time being.”

I really enjoyed my time with the first three DC Maggie Jamieson books, but somehow book number four slipped between the cracks of my TBR mountain when it was first published earlier this year. When I was invited to read book number five early, I thought it was the perfect opportunity to catch up with this series. There is no doubt that Dead Secret is another engaging and suspenseful sequel. DC Maggie Jamieson makes for a great main character and as always I liked seeing her interact with the rest of the team. As a bonus, we also have a big focus on the probation side of things as well as a domestic abuse shelter… Giving this series in general a refreshing angle that makes it stand out from your usual detective thriller. The writing itself is really engaging and I literally flew through the pages. I do have to say that I was a bit disappointed that I guessed the truth about Ronnie and who was behind it all very early on, which kind of put a damper on things as I kept hoping I was going to be proven wrong. Sadly, this wasn’t the case, but at least the journey itself was entertaining enough to still keep me invested. And after how Dead Secret ended, I’m definitely looking forward to pick up the next book ASAP.

“Right now, it felt to her they were doing a jigsaw and trying to force similar-shaped pieces into the available holes just to get it finished.”

I can always rely on the DI Kim Stone books whenever I’m in the mood for a good detective thriller, and there is no doubt that this series just keeps delivering. Dead Memories is another excellent sequel and probably one of the strongest stories yet… The plot itself is intense, suspenseful and absolutely fascinating; especially since the murder investigation seems to be connected to Kim Stone’s own complicated childhood. Unputdownable definitely applies here, as I simply couldn’t stop reading until I read those final pages to discover how it would all end. I like the new dynamics with Penn, and it’s always great to see Doctor A appear again as I do love her character. Alison Lowe is yet another character to make her appearance again; having past characters returning is one of the many reasons why you should read these books in order, but every single book will be well worth your time in the first place. I myself already can’t wait to pick up the next book to see what it has in store for Kim and her team!