Time for another round of Yvonne’s Shorties! Since I have a huge pile of backlog reviews of the books I read during my break, I will be featuring an extra book in my shorties posts until I’ve caught up. This time around an urban fantasy slash detective thriller novella I enjoyed, the first book of a New Zealand detective thriller that surprisingly didn’t work as well as I hoped and a spy thriller I kind of wish I had just DNFed. 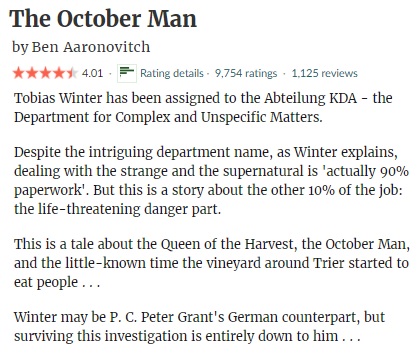 I’m having so much fun with this series, and I decided to read this novella as well before I tackle the final pending sequel that is already published. The October Man is basically a spin off where we meet the German version of Peter Grant: Tobias Winter. The first few chapters have some useful information about magic in general for those who have forgotten some of the details, but I wouldn’t recommend reading this without reading the previous books because things might be hard to understand otherwise (especially those references to the London branch). The story is mostly set in Trier, a German city I’ve had the pleasure to visit in the past so that made this story extra special. Tobias Winter is easy to connect to and has a similar kind of humor as our beloved Peter Grant, so I felt at home with this story straight away… In fact, I’m keeping my fingers crossed that we will see more of him and the other characters in the future! This has been my favorite novella of the series by far and it has convinced me to try the short story collection Tales From The Folly after I finish book number eight.

“The fact that I had to make a concerted effort to change my focus, to draw a clear line between my personal and professional involvement, annoyed the crap out of me. Maybe some people weren’t cut out for divorcing the two. Maybe some things were too deep to ignore.”

Right… I guess it’s unpopular opinion time again! I’ve been meaning to start this series for years now and kept hearing fantastic things about it, so I had high hopes I would love my time with Sam Shephard as well. I don’t often come across stories set in New Zealand, so the setting was without a doubt a huge bonus for me… But sadly the actual story somehow fell rather flat for me though after such a spectacular beginning. Overkill starts on such a high note, and somehow that same level of intensity or suspense was never actually achieved afterwards. In fact, I found parts of the plot rather dull and predictable and I had a hard time staying focused… Sure, the ending was a bit of a surprise and an interesting twist, but the story itself didn’t really stand out from other detective thriller stories out there. It was all (mostly) rather forgettable, and the fact that I wasn’t convinced by the lead character Sam Shephard nor how she behaved didn’t really help either. I’m still curious about the second book as I want to see if things improve, but for now other series will take a priority instead.

“His fury peaked in that moment. He refused to die because of something so random, without cause or purpose. He had to know the reason. There had to be an answer to it.”

I got a copy of Nomad on a whim years ago at a hostel book exchange, and it has been collecting dust on my shelves ever since… When I was in the mood for a spy thriller recently, I thought it was about time I did pick it up. Spy thrillers can go both ways for me and I have to be in the mood for them, but I was looking forward to some action, conspiracy and danger. Sadly, while Nomad started off promising enough, I was soon rather bored by it all. The constant descriptions of yet another showdown, fire fight and clever escape really got old fast, and the pace was surprisingly slow for a story with a supposedly high dose of adrenaline. On top of that, I wasn’t impressed be the sudden POV switches within the same chapter. Having to figure out who was in the spotlight only to have it changed AGAIN became very frustrating. On top of this, the characters were extremely underdeveloped and mostly cliches, and I confess that I skimread at least half of this book as I couldn’t be bothered with more boring details of yet another showdown. There is one thing for sure: this series is unfortunately most definitely not for me, and I kind of wish I had just given in to my instincts and DNFed it.