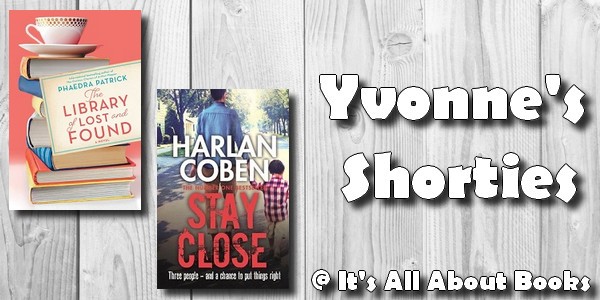 Time for another round of Yvonne’s Shorties! This time a bookish contemporary that sadly didn’t work for me and a thriller that did. 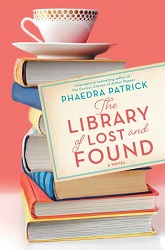 “Sometimes there’s no right decision. Just the one you make at the time.” 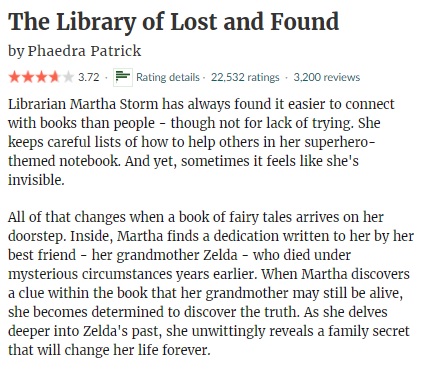 It’s unpopular opinion time again!! I really enjoyed Phaedra Patrick’s other book The Curious Charms Of Arthur Pepper and I was in the mood for an uplifting bookish story, so I fully expected to have a brilliant time with The Library Of Lost And Found. I’m not sure if it simply wasn’t the right story for me at this time, but somehow I ended up struggling considerably with it instead… Until the point that I even started debating whether to simply DNF it. I’m not exactly sure why I felt such a strong aversion towards this story, but it has mainly to do with the fact that I didn’t like the main character Martha Storm AT ALL. She is basically a human doormat who people keep taking advantage of to do the jobs they don’t want to, and to make things worse it almost seems like she thinks she is better than the rest for doing everything for everybody. Pretty self-centered for someone who can’t say no and keeps being treated badly… And there was something about Martha that made spending time with her worse than a trip to the dentist. I thought things would improve once we learn more about Zelda, but seeing the same treatment and my strong dislike of Martha made me start skimreading just to get it over with sooner. I did like the bookish element with the library and the mystery book, but the main character sadly ruined the story for me (and the rest of the characters were basically cliches too).

“Hope could be a wonderful thing. But hope could crush you anew every single day. Hope could be the cruelest thing in the world.” 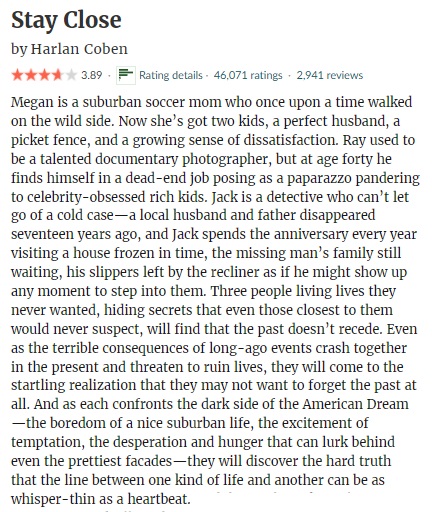 I don’t usually watch an adaptation before reading the book, but I needed to do so for a BTB Bingo prompt and immediately thought of the Netflix adaptation of Stay Close. I’ve had a copy of the book for quite some time now and while I did think part of the plot of the adaptation was a bit over the top, as a whole the Netflix series made me excited to pick up the original book. And as usual, I enjoyed the book a lot better! I think this probably has a lot to do with the TV series adding certain side stories that were a bit over the top for me (or at least made the story less believable), and I liked the ‘cleaner’ plot of the book. Of course that major final twist didn’t come as a surprise anymore, but I do know it would have worked otherwise as the adaptation had me fooled. Stay Close is part family drama, part serial killer/detective thriller and part psychological thriller with a twist; I liked how the different storylines slowly came together and as a whole it turned out to be an engaging read. The main characters aren’t exactly likeable, but somehow they work for the plot and the intrigue around the secrets and missing men will make you keep turning those pages. Another successful Harlan Coben book, that’s for sure!