Time for another round of Yvonne’s Shorties! This time around two detective thrillers… The first a sequel of a favorite series that was slightly ruined by a much hated character popping up again, and the second the first book of a series I’ve been meaning to read for a long time now.

“Shit, I was in such a rush this morning after no sleep that I forgot to pack my crystal ball, tarot cards and other fortune-telling devices, so I suppose we’d best just talk to her and find out.”

I can’t believe I’m finally almost caught up with this series! The DI Kim Stone books are on my list of favorite detective series, and I always look forward to meeting up with Kim and her team again. That said, Stolen Ones wasn’t exactly my favorite of the series mainly due to one character in particular: Dr Alex Thorne. I know I’m in the minority when it comes to this character, but I really can’t stand her and having Alex pop up AGAIN really put a damper on things. Dr. A and Alison appearing again? Alright with me, because I like their characters. But not only is the whole duel between Alex and Kim getting old and repetitive, she distracts from the main plot and doesn’t do this sequel any favor. To make things even worse, there are hints that we will see even more of her in the future… And I will NOT be looking forward to that. That said, the main case discussed in Stolen Ones is without doubt intriguing and probably what saved the story for me. Knowing the main suspect from the beginning can go both ways, but I liked how it was developed here. Especially with Kim Stone not having the upper hand in the investigation this time around, as the suspect Stev Harte seems to be calling all the shots… The final twist relating to this case came as a surprise too. 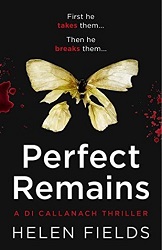 “There’s a theory that we need people to challenge us as much as to praise us, so that we can justify and reason.”

I’m so happy to be finally reading this series from the beginning! After being blown away by book number seven a little while ago, I decided to plan for a series binge-read so that I’m fully caught up with the series before the next sequel publishes. I already knew that I was probably going to be in for a treat after my first impression of the series… And Perfect Remains is without doubt a very strong first book. It’s been great getting to know the different characters in play better and seeing how everything and everyone started. On top of this, we have a very intriguing serial killer case that also gets close to the team; lots of tension, suspense and plot twist potential! We even get chapters from the POV of the killer, and this definitely adds a little something extra to the plot. While we do know his identity very early on in the story, this doesn’t damper things because DI Callanach and his team still have to discover the clues and find him. The dynamics in the team are interesting; tension as well as easier acceptance, and I can’t wait to see how things will evolve in the next books. I’m definitely looking forward to read the rest of the books!